The Waikerie club fleet is comprised of the ASK-21 WKI, the LS-4a XOK, the Discus b GHP and the Duo Discuss DDH. The Duo Discuss DDH is fitted with an LXNAV S100. On flying days, the club fleet is joined by club members in their privately owned aircraft which include an ASG29E and a AS33E (on the way), Hph304 ‘Shark’, Astir 77, two Kestrel 17, ASH31Mi, LS4a Top, ASH25M two Arcus M, DG500M Elan, ASW20 Top, ASW20F, Dimona, Diamant, and JS1 BTJ. Occasionally, we are entertained by the appearance of the self-launching jet-powered ASW-20. (Note: These privately owned aircraft are not available for hire)

All our club gliders have:

Our fleet allows for pilots of any experience level 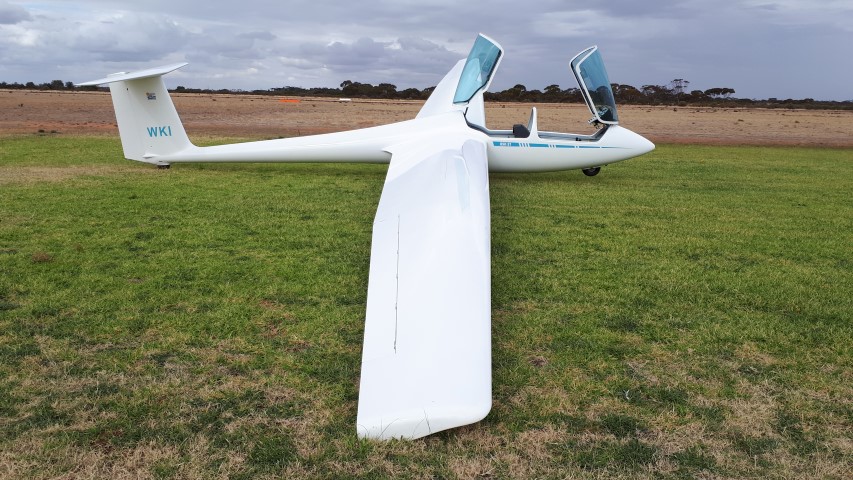 The AS K21 is a pleasant glider to fly. It is good for training and cross country flight, and is fully aerobatic. While not an all-out performance glider, it is one that people enjoy flying. The glider’s systems are relatively simple: fixed undercarriage, no water ballast. A spin kit is available for spin training and check flights.

This sailplane was purchased from another club in 2008. In 2012 it received a major re-finish and re-furbishment, and it’s in excellent condition.

The LS4a is a forgiving glider, with a large comfortable cockpit. First built in 1981, the LS4a consolidated Rolladen-Schneider’s reputation for well rounded sailplanes that are easy to fly and top performers, being docile enough for beginners with a performance only slightly below the latest standard class sailplanes. The continued demand for the type may result in the LS4 being put back into production by the Slovenian manufacturer AMS-Flight.

Our tug is a Piper Pawnee, and with its 250hp engine it is capable of launching even the heaviest gliders under most conditions.

Discus b HP is a very easy to fly glider with very good performance return. Most pilots feel very much at ease in this glider knowing there is ample performance to assist all skill level pilots with their flying.

The Schempp-Hirth “Duo-Discus” sailplane is a tandem two-seat sailplane of glass and carbon fibre construction, with a fixed horizontal stabilizer and elevator in a “T” tail configuration. The elevator Trim control! consists of adjustable springs within the elevator control circuit.

The wing is a four stage trapezoid in plan view, with double-panel airbrakes on the upper surface and internal pushrod driven ailerons. The wings contain integral water ballast tanks with a total capacity of 198 litres.

The fuselage supports the large, single piece canopy which is hinged sideways.

The main wheel, which is equipped with a hydraulic disc brake, is retractable, while the nose and tail wheels are fixed. The main wheel is retracted and extended from the front seat. It is not possible to lock the undercarriage from the rear seat. The main wheel brake is operated by a lever on each Control Column or at the full extension of the airbrakes.

All of the control circuits are automatically hooked up when the sailplane is rigged.